Dogs, cats and co.
How to help your pet through hot days

It’s getting warm in Germany. You can find out here how you can protect your pets from heat stroke, dehydration and the like.

Not just people, too pets high temperatures in summer can cause problems. Dogs, guinea pigs or birds should therefore be protected from the blazing sun and always have enough liquid. Pet owners should note the following tips from the German Animal Welfare Association and other experts:

Give pets plenty of fluids

Unlike humans, dogs can Cat, hamsters and co. do not cool down by sweating, but primarily by panting and drinking. Sufficient liquid is therefore vital to protect the animals from dehydration and a life-threatening rise in body temperature.

Note the changed position of the sun

Rabbits, guinea pigs and ornamental birds whose cages or enclosures are exposed to the blazing sun are among the most common heat victims. Pets should always be able to retreat to a shady spot. It should be noted that the position of the sun changes during the day. Shady little houses, cool stone slabs or damp towels over the enclosure are also helpful. dogs should not be clipped too short in summer, as they can get sunburned on hairless areas.

Heat stroke symptoms and when to see the vet

If there is a lack of shade, fresh air and sufficient drinking water, the animals will accumulate heat, which then quickly leads to a heatstroke can lead. In rodents and rabbits, for example, temperatures of 25 to 28 degrees Celsius can lead to collapse. Glassy eyes, a deep red tongue, and stretched-necked panting are signs that a dog is being severely affected by the heat. Vomiting, loss of balance and loss of consciousness indicate heat stroke. In cats, this can be recognized by restlessness, increased heartbeat and increased temperature or by the fact that the animals are panting heavily on their stomachs. If you have these symptoms, go to the vet as soon as possible.

Avoid draughts, despite the heat

Pets need fresh air when it’s hot, but cages shouldn’t be in a draught. Because what makes the hot temperatures more bearable for people can lead to serious illnesses in animals.

When it is very hot, walking should be done in the cooler morning and evening hours and, if possible, in shady parks or wooded areas. The same applies to horseback rides.

Don’t leave animals in the car

Animals should never automobile be left behind while masters or mistresses go shopping or eat ice cream. After all, the high temperatures transform the interior into an oven after just a short time. The consequences for the animal are lack of oxygen, nausea and circulatory problems up to circulatory failure. In the worst case, an agonizing death threatens. An open sunroof or a window ajar is not enough to cool you down, even if the car is in the shade.

Unavoidable car journeys should be made during the cooler times of the day and night. The transport boxes should ensure a good exchange of air, windows should remain open while driving. A sufficient supply of drinking water and light-colored cloths, which can be moistened and used as cold compresses or cage covers, also belong in the luggage. Ice packs from the fridge can be placed in the box. 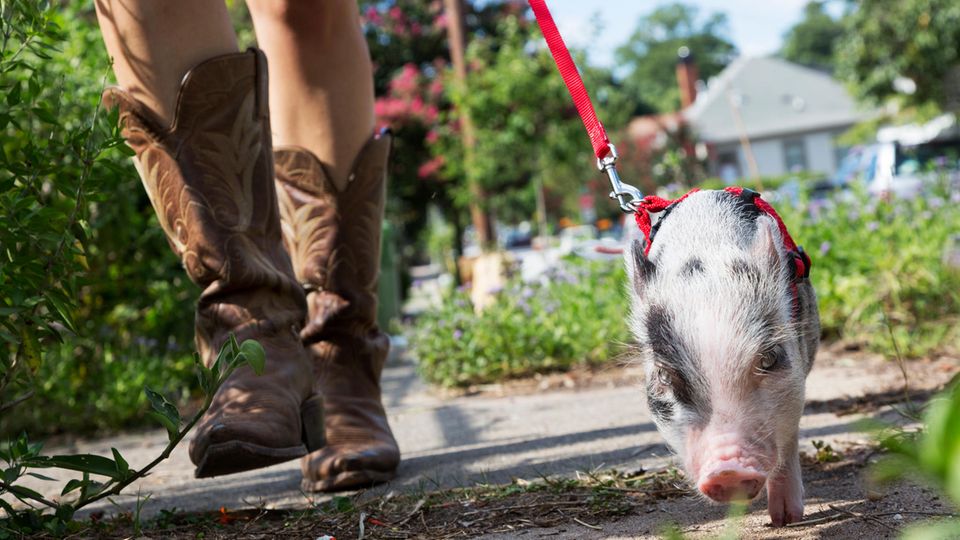 The cute pigs with their curly tails are said to serve as emotional support for some people. But in 2014, a pig caused quite a mess when it left a pile in the aisle of an airplane. The woman who brought her pig on the plane for emotional support had to leave it with the animal.

If you provide birds with a bathing house, you should change the water frequently. Birds that do not use bathing houses can be carefully sprayed with water.

The water in the aquarium can heat up life-threateningly for the fish. If necessary, cold water should be carefully refilled.

Watch the video: In May, the Irish President’s dog became a star on social networks. The hearts of many users fly to the young Bernese Mountain Dog because of a video on the official accounts of the head of state.